This Variety was added to the show matrix in 2020.

The Standard for judging them is not the Australian (ANBC) standard used for all other varieties but the World Budgerigar Organisation (WBO) Standard. 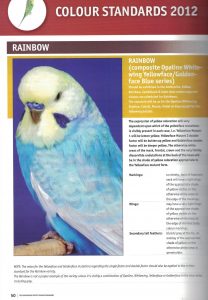 Unfortunately, there is considerable confusion out in the Budgie world, where there are breeders that sell birds as “Rainbows” when in fact they are not considered Rainbows in the true sense of the word.

They might be “Pretty budgies”, IE: a mixture of many other colours and Varieties, such as Pied’s, both Recessive & Dominant, Spangle, Greywing and or multiple mixtures of these.

How do you breed them.

Lets look at the varieties involved and their Genetics.

So, as you can see starting from scratch will take a few generations to “Build” a Rainbow. But it can be a “Challenge” and a lot of fun & enjoyment.    Every nest of babies will be a surprise. An aviary full of these varieties and colours is quite stunning, so it’s easy to see why they are so popular. 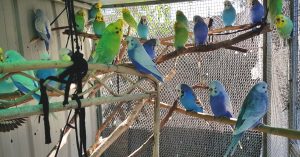 The breeding expectations for these varieties are on the “About Breeding & Genetics” page under “Beginner information”.

The photo’s and video’s used on this page are from club member Jen Jewel Brown’s aviary and we thank them very much for their support and help in promoting this class of  birds. 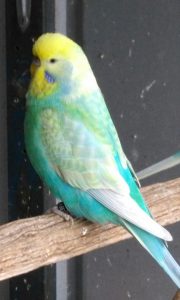 Have a look at Marie’s aviary full of Rainbows and the varieties that make them up. Clearwings, Opaline, Yellowface & Goldenface.

As Outlined above, the Genetic mix  required to breed Rainbows is quite complicated and challenging. Below is a chart of the breeding expectations from the different genetic combinations. A PDF copy of this chart can be downloaded from here: Rainbow Breeding Expectations 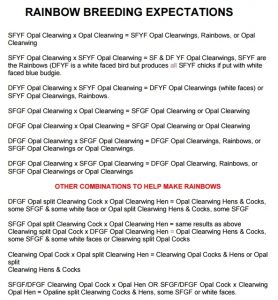